Wrapping up the first week in Taiwan

We only visited Tainan for a short while to see Jeff's grandparents' home... which now belongs to my in-laws. It is a one story home, on a really nice street, with two bedrooms, kitchen, and a HUGE living area (that also doubled as an office while Jeff's grandfather was still working). When we arrived Jeff, Ami, Chase and I stood before the house alter and 'announced' (prayed?) to the grandparents that we were visiting. In the photograph below you can see the alter with fruit in front of it. What I loved most about the house was their wall of graduation photos. They had every child and spouce lined up by the ceiling... Mr. Tsai is the 3rd from the left, and Mrs. Tsai next to him 4th from the left (sorry for the bad photo, I didn't realize the glare at the time :( ). It was really cool that all the kids pretty much looked the same in their photos, cap, gown, and even ties for the guys and girls :). Mr. Tsai is the second of 6 children, the oldest and youngest were girls, and four boys in the middle. 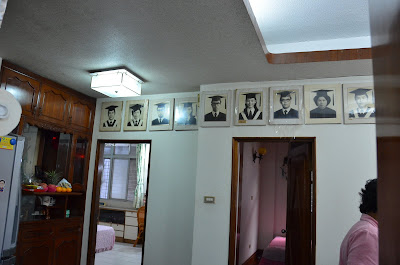 After eating lunch at the house, we went sight seeing around the city. Tainan was originally the main city of Taiwan, since it has a huge port... but the balance has since shifted to the Northern most city of Taipei (the literal translation of Taipei means North City, and most of their cities are named just as obviously... so much more simple than our cities in America!). This is one of their main parks - my dad and Chase loved looking at the huge Koi swimming in the pond. Later Mrs. Tsai told me that this dragon statue has significance in the way it is spraying water on the golden ball, I guess the ball is supposed to be from the dragon's throat, and is very special, and the front 'claw' that is holding it is saying that he is offering good will to the people. I am glad I have my mother in law to explain all this cool stuff to me :) 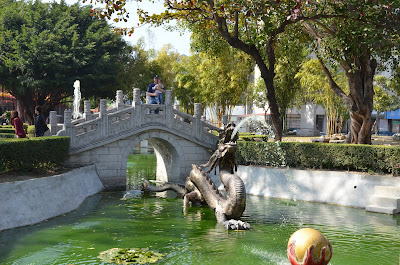 In another area of the park we went into a shrine/temple... Here is Chase sitting on the base of a column. 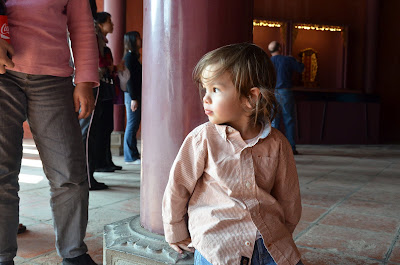 And here he is asking Mama to take 'Pi-tures!' of him posing... I really don't know where he got this from, but it is hilarious, and I LOVE it :) 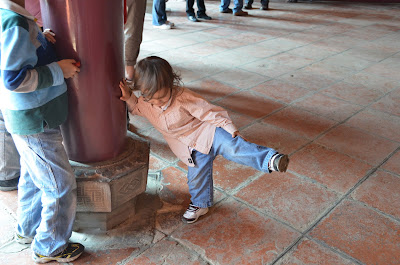 A neat 'brick' wall around the temple area. 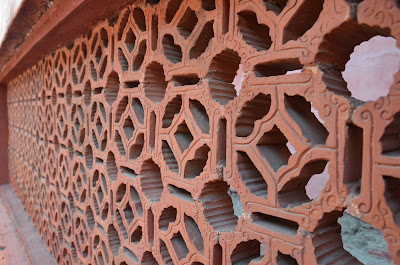 After the temple, we went to another sight that was the location of the Taiwanese/Dutch treaty signing. Their history is actually kind of similar to America in that they were a colony and then rose up to fight for their independence. This was a really cool history lesson! While we were there, a group of students (?) were SUPER interested in Chase, and once they got the nod from Jeff they swarmed over to see Chase and take pictures, once they realized that I had another sleeping baby strapped to my chest they started taking photos of Ami too! I can't believe how much attention the kids have received while being here... then again, in most of the places we visited we were almost the only white people we saw, so two Hapa children definitely stood out.... and Chase with his light brown curling hair drew lots of stares, especially when they learned he was a boy (!). hehe! Most boys here have buzzed heads. 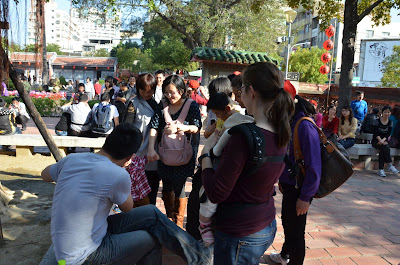 After the Dutch/Taiwan treaty site. We went to a fort. It was pretty cool seeing the old cannons and moat. They had two black swans swimming around, but I never was able to get a shot of them since both kids started having melt downs by that point in the day. Jeff got a shot on his iPhone though, which I am glad he did. 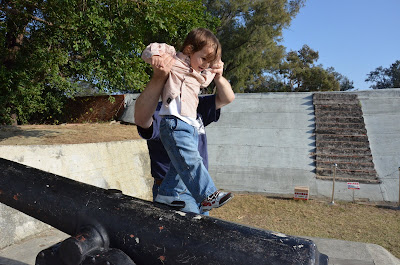 Mom with one of the really HUGE and cool trees lining the inside of the fort, there were at least 4 this size, but this one had the neatest trunks. 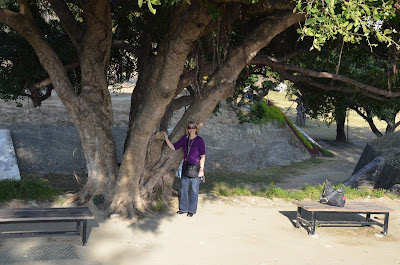 The tree mom stood by from a different angle, it was so neat how it grew out and over the interior of the fort. To get the whole thing in a shot would have had me standing almost to the other side of the fort wall! 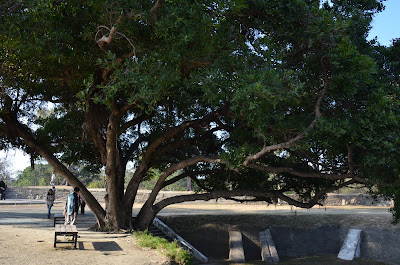 After leaving Tainan we headed a short while away to Kaohsiung to visit Mr. Tsai's older sister's and stayed at her house. We only spent about a total of 24 hours there, but she and her husband were so amazing! They treated us to so much... food, fun and sightseeing... and were very flexible about having the kids, since they have 3 grandchildren of their own. My parents and Jeff got to go out and do more than I was able to, but it was so much better for the kids to have a day of getting good naps and being free to run, or roll in Ami's case, around (at least for Chase, as Ami is not mobile yet!). 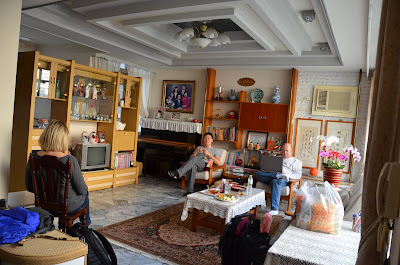 The 'garage' door, all hand carved... every door in the house was unique and solid wood... you wouldn't find this in the States! So cool! 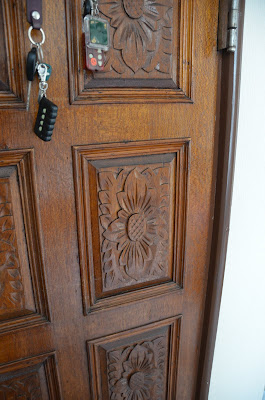 One of the coolest things about their house was the room that Jeff, Chase, Ami and I all stayed in. It had Japanese styled doors to close off the bed portion from the rest of the room, which was so great for the kids! I could just slide the panel shut and Chase had an entire mattress room to squirrel around in before settling down for nap, and for Ami I could shut the panel and there was no way she could roll off of the mattress, since they covered that entire area! Love Love Love that room... It is too bad that I wouldn't really be able to do something similar here in our new house... the resale value of that is probably not great to an American family :(
Ami rolling and playing around on the mattresses. 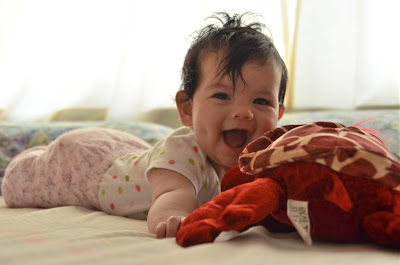 Chase loved to jump from the elevated area into the rest of the room and announce "Big Jump!" I also think he loved that this was a space just for us, and that he could jump around, and fall down on a mattress wherever he landed :) 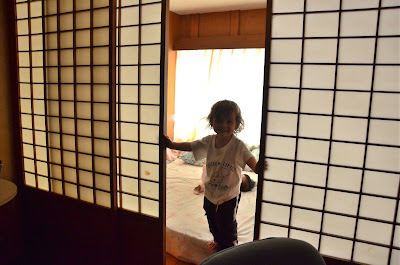 Mom took a photo of us outside their wonderful house with Jeff's Uncle. (Chase was off to the park with Jeff's Aunt, so he wasn't there for the photo.) Behind that low brick wall was a Koi pond that went around the side of the house to the back with some huge fish! The room above the garage was the room we slept in. 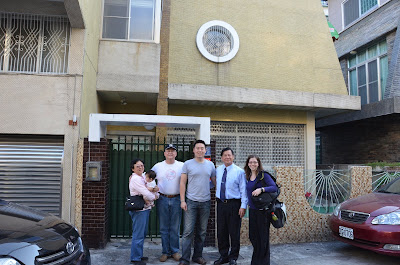 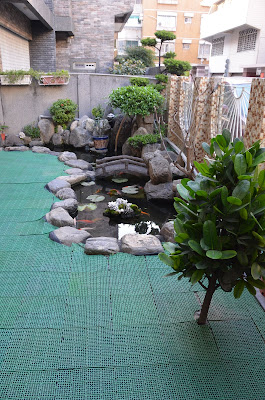 I wish we could have spent more time with these relatives, they were so great to be with! But it was good to head back to Taipei and have some time to relax and space for Chase to consistently go to sleep in :)
Posted by Mel Titus Tsai at Sunday, February 13, 2011