Finally on Saturday February 12th we met up with Jeff's cousin Sophia, her husband Rex and their two boys! We had met her younger sister Tiffany the previous weekend, stayed at her parents house in Kaohsiung and she had loaned us a stroller (because we forgot to bring one!), if that gives you any context as to why I was really looking forward to meeting her in person!
We decided to meet up and go to a children's library a little outside of Taipei but still considered within the city limits. This area is known especially for its mineral springs... Walking out of the metro station we encountered this cool water fountain/sculpture... the water raised and lowered at what seemed to be a random patter, this pic was taken when the water was spraying fairly high. 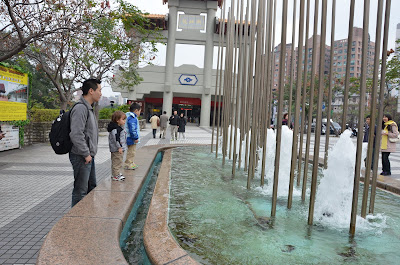 There was a really cool park on our way to the library, with bridges, cool trees, and work out equipment :) 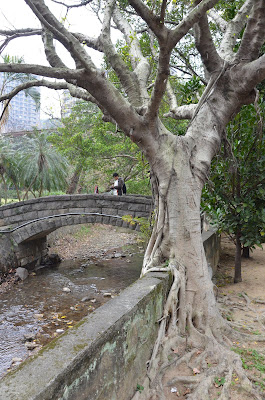 Dad and Chase on the bridge, with this cool tree that was spanning the low wall. 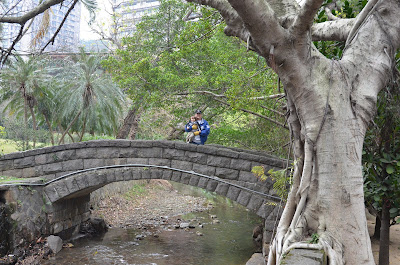 Mom and Mrs. Tsai took their shoes of to get a foot massage walking on the pebbled walk way... in the background you can see some of the workout equipment that was scattered in stations throughout the park... in another area there were 'elliptical' type machines - all human powered with English and Chinese instructions as to how to use it and what muscles it will target... very cool! 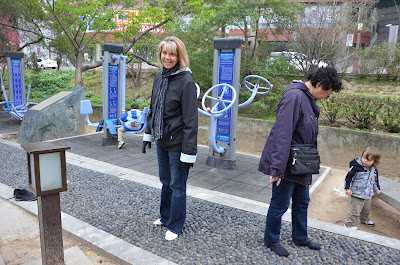 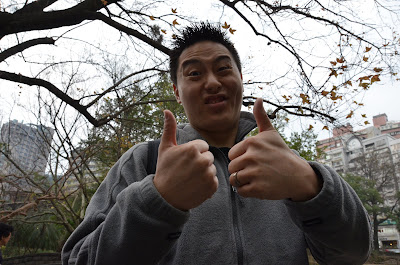 Mom by another cool tree 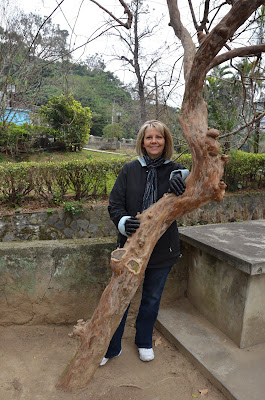 We got some lunch before going to the library... I got sushi :) I *heart* Sushi YUMMY! 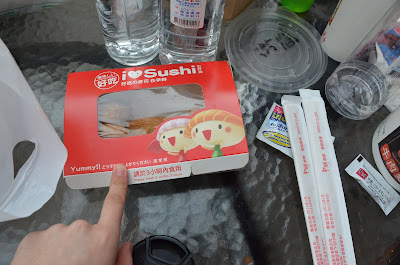 Unfortunately I never got pictures by the library... the grounds were very cool, and the basement was geared just for smaller kids, Chase loved it but was starting to get very squirrelly since it was about an hour past normal nap time... we had to leave after only about a half hour because I was afraid we would have a meltdown. Chase ended up falling asleep on my back in the Ergo on the train ride home, and then continued to sleep after I put him in bed at the apartment. It was a fun and full morning with family! :)

Later that night we met up with Sophia and her family again at Pizza Hut... as well as another of Mr. Tsai's brothers (I can't remember his name at the moment, I will have to check on this with Jeff). and any American who has not visited an Asian Pizza Hut wouldn't understand... these places are NICE and with great service, seriously. They have a fantastic salad bar and pizza buffet, with western things and Asian specific things like Lychee Jello and Kimchi barbeque chicken pizza. I really wanted to take a photo of that, but felt very silly as we were the only westerners in the place and keeping Chase in check was very difficult that meal... he didn't want pizza that night :( He did like the Lychee Jello though. *Sigh*

After the kids were down for the night, Jeff and I ran out to a smaller nightmarket which had more clothing and shoe places than food... which was the opposite of the first night market we visited.
Just thought I would post this photo... I guess Solvil et Titus is a Swiss watch company, who knew? I think it is fun to see my maiden name in Taiwan, of all places! 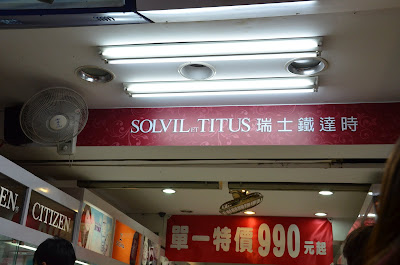 Sunday Jeff and I went to quite a few department stores just down the street from us, lots of walking, but we found lots of fun things for the kids :) I mean, who else will have a "Dough-doh" food court set that has dumpling and sushi molds? I mean that is COOL, right? Well, at least I am psyched about it, even if the kids don't care.

Sunday night we met up with Mrs. Tsai's brother and his family at a very nice Hot Pot restaurant down the street from the apartment. 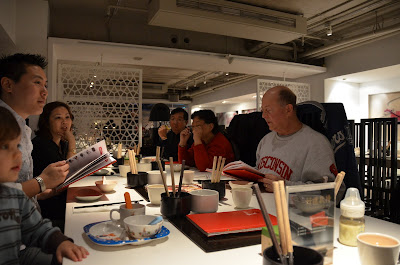 Chase did great! We made sure he ate dinner before going out for dinner this time, that way he wasn't hungry and then presented with food that he didn't care to try... it worked great!

My mom and I got the vegetarian ... a whole tier of veggies, different tofus and lots of mushrooms (which, as a person who steers clear of any type of fungus, this was not my thing, but there were some cool looking ones... I just gave them all to my mom :) ) 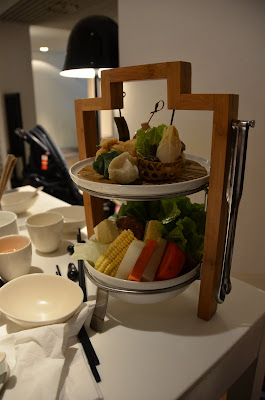 Mom and our separated hot pot, you can see all the dishes, sauces and things that were continually being brought... wow, just wow... so glad I got to try hot pot before we left! I didn't get a photo of the dessert, but it was great! A small (for an American like me) piece of fabulous chocolate cake, and two bruleed banana slices.... I HAVE to try doing this at home, it was incredible... like sugared banana chips with fresh bananas :) YUM! Even Chase ate a bruleed banana, and liked it! 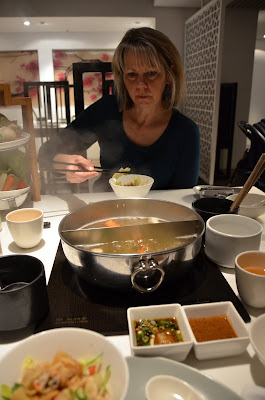 Back at the apartment, I started photographing everything I had been wanting to photograph but been putting off until later... since there was only one day left I had to do it! 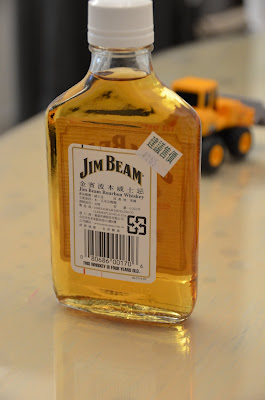 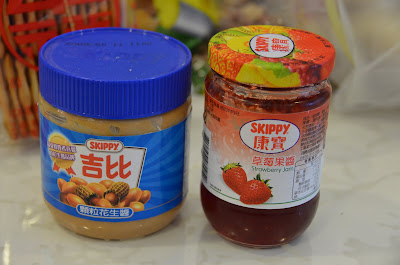 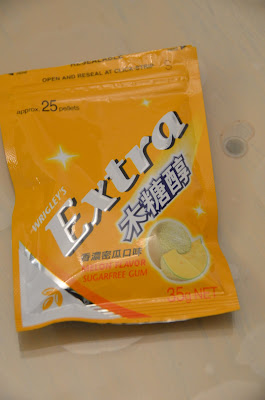 Ami holding her bottle and trying to feed herself... she did OK at it until it got low, and then needed help getting the final ounce or so... what a GOOD baby to drink from a bottle! So glad, since Chase wouldn't take one until he was almost 9 months old (that meant no going out for dates, or basically any type of leaving my baby for 9 months! geesh that was a long time!). 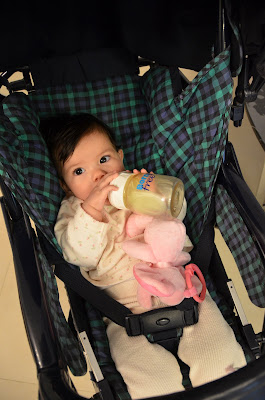 One last day to wrap up and then (FINALLY) I will have covered our trip to Taiwan! This is really mostly for me to look back on when I can't remember things, but thanks to all you who have been reading and tolerating my long winded-ness ;)