The last 24 hours in Taipei

Monday was a whirlwind of shopping, packing and trying to squeeze every last thing we wanted to do.
After making sure we were as packed as possible, and the kids were asleep, Jeff and I ventured out for one last night of exploring the night markets. This time we went to the Taipei Tourist Night Market, which I did not like as much as the other two night markets we had visited... but they did have some more touristy type things and weird things, like a huge albino boa constrictor in a cage (no pics allowed), and fresh ingredients for lots of restaurants... just sitting out there! 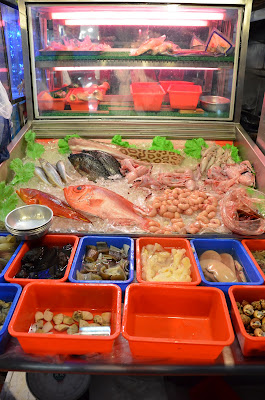 Choose your meal... Fish, crustaceans.... and not shown are turtles and baby eels... yum! 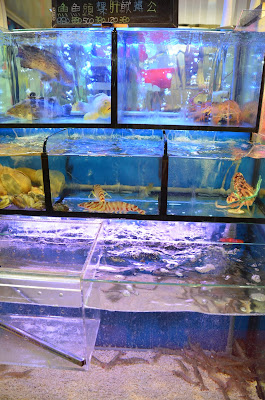 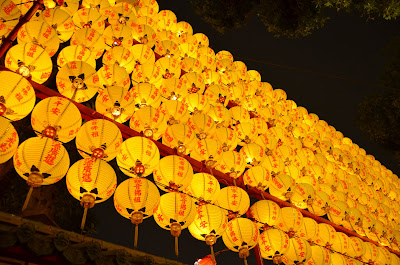 A temple or shrine (not sure which) had some really impressive fish and other lanterns. 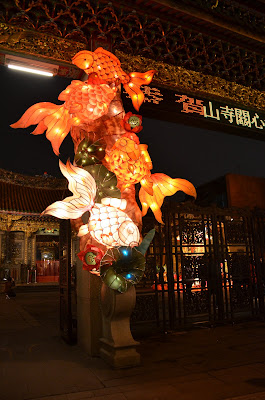 We stepped inside ... WOW 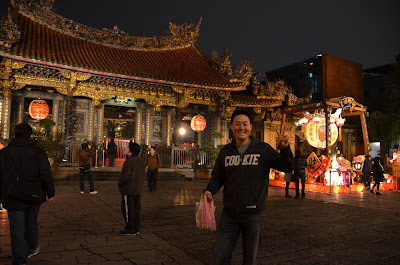 BTW do you like Jeff's new 'Cookie' sweatshirt? It is a Cookie Monster sweatshirt from the more shopping oriented night market we visited a few days before.... I think it is cute my hubby likes fun stuff like that, 'cause I do... and I may or may not have got Cookie Monster and Wonder Woman shirts for myself ;)

In a fancier area of town we got 'French' crepes... I got a strawberry, chocolate and whipped cream one... SOOO GOOD! And Jeff got a weird Asian one that had ham, mayo and veggies... so, not French! 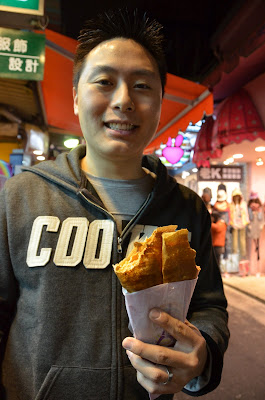 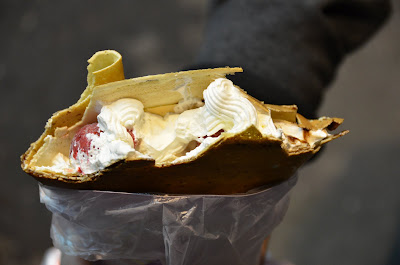 Tuesday morning I was up at 4am, finishing packing and getting ready. We had a van pick us up at 6:30am and we got to the airport with time to sit and let Mrs. Tsai get those last hugs with the kids :) ... and for Jeff to get a Whopper... ick. 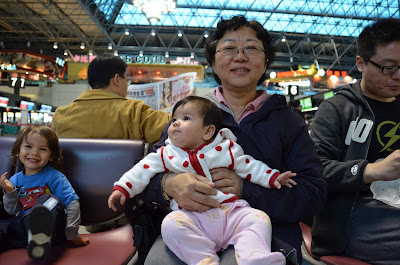 While waiting for our flight on the other side of security, just about 10 min before neededing to board, Chase ran off and Jeff followed him with Ami in his arms... not a minute later I hear a cry, my baby boy's cry and walk around the corner to see Jeff hunched over at the WRONG end of the walkway! I dropped my stuff with my parents and ran over. Chase's drawstring on his pants was caught in the moving walkway under the lip of the metal end... I saw a dollar coin sized patch of blood on the metal end where the teeth are... I stepped on the walkway and almost tripped myself since it was still going, jumped off and searched frantically for the "Stop" button, found it, and Jeff (who had been kneeling at the end, holding Chase up by the arm this whole time so he wouldn't get pulled down, and holding Ami in the other arm this whole time) was able to pull Chase and his drawstring off the belt. Chase's lip looked like it had been ripped open, which it probably had, and was gushing blood (at least that's what it looked like to me). It was already swelling to twice its size and I wasn't sure if he had nocked out any teeth, thats how bloody his mouth was.

I ran with him into the bathroom and started cleaning him up, there was a cleaning lady in there that was SO helpful bringing me paper towels and thicker toilet paper... I don't know if I ever thanked her, but Cleaning Lady, if you ever read this... THANK YOU, seriously, your help was invaluable. Chase fought me cleaning him up the entire time, screaming and crying... it must have hurt for anything to touch that open wound :( But once I could see that it was only his lip that was cut open, no teeth missing, no cut on his tongue... I reminded myself that face wounds always bleed the worst, and prayed hard that he would be ok.. with no concussion.

This is making me almost sick just writing it down again... Chase was trying to go on the moving walkway like he did earlier, the right way, with Baba... but Jeff just couldn't stop him fast enough, and Chase didn't know that there was a 'wrong' way to get on the walkway :(

By the time I got around to taking a photo of his lip as we were leaving O'Hare, it looked like a pretty minor accident... 20 hours after the incident there was barely any swelling, no bruising on his face, and only three scabs.... geesh, very different from the 1/4 inch bleeding gap in his lip, the 3 times more swollen and jutting out lip, and the two smaller bleeding wounds that looked as if his upper lip had been pierced through by the metal walkway teeth. He refused to let me put ice on the wound during the first hour in the airport and then on the plane flight. I was only able to get to ice it for about 5 min in flight to Tokyo with a constant stream of tick tac bribes. Every time he would smile or pout for the first few hours he would re-open it and cry :( Not fun to deal with during travel, that's for sure. At least he is way better now. 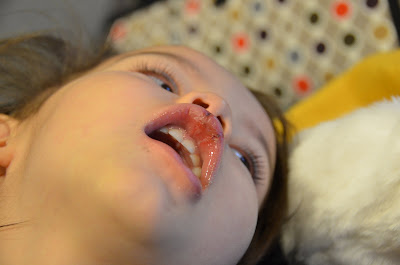 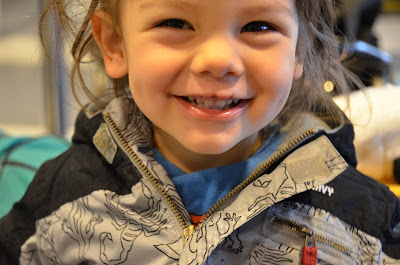 Seeing the kid today you would never have known he had anything happen to his mouth. No scars or anything... thank you Jesus!
So that was the eventful wrap up to a very eventful trip... it took us a full two weeks to recover from Jet-lag with the kids. I had heard Jet-lag is worse flying East... they were right.
Now we are starting to fall back into our pattern here in Chicago... thank goodness.
In other news, we will probably be closing on our new house March 25th! YAY!
Posted by Mel Titus Tsai at Friday, March 04, 2011

You look like you had such an awesome trip! I am jealous! That is so sad about Chase, good thing Jeff saved him from something much worse. That is exciting about your house? Has everything worked out with the house you put and offer on? Details? I love you Mel! Miss you!

Ugh! What a way to end your trip! Glad to see Chase smiling in the end.