The Great Wall, and a Few Great Naps!

Yesterday, instead of going to that bookstore I mentioned, I ended up going back to the room and crashing. I think I slept for around 3 hours, just in time to wake up and meet up with Jeff, Sylvia (Jeff's boss) and Professor Bao Hung Sun. Professor Sun took us to a wholesale Market that most of the locals go to for purses, trinkets, jewelry, clothes and TONS of other things. Jeff and I found a couple of things there, but nothing really unique. Then we took a cab to the Silk and Pearl Markets, which are both indoor at the same place. An interesting thing about most of the markets now is that for the Olympic Games the city tried to ‘clean up’ a lot of the street vendors, and so built buildings on the site of the original markets to create more of a mall type experience (if you think going through narrow aisles and getting grabbed or having clothing pushed into your view is a ‘mall experience’). We got a few things at this market though because it was more geared toward tourists and had more of the ‘Chinese’ style things. I actually was able to purchase 100% silk brocade fabrics, a yard of each, so I might have some sewing projects up my sleeve in the future.

Today (Saturday) we took an excursion to the Great Wall of China with a guide (her name was Lotus), driver, Sylvia, Jeff and myself. We went to the less touristy spot of the wall that was an hour and a half outside of Beijing by car. We arrived at the wall very early, about 10:15am, before most of the crowds started funneling in. They built a gondola lift so that you can go to the top of the wall, saving your energy for hiking the actual wall, and not wasting yourself on the steep climb up. It was pretty tricky footing in parts, but since this section has been restored, it is in very good shape otherwise. I took a lot of photos and took it easy, I was getting easily winded by the altitude, my asthma and the fact that I am pregnant. Jeff and Sylvia decided to hike up to the highest watch tower on our section of the wall, there was one part that was about 5 stories (Sylvia lost count around 500 stairs) straight up of stairs… needless to say, I stayed at the lower part! I took photos of their little ant sized bodies as they climbed up and away from me… I will see if I can zoom in on some of those to see them more clearly. 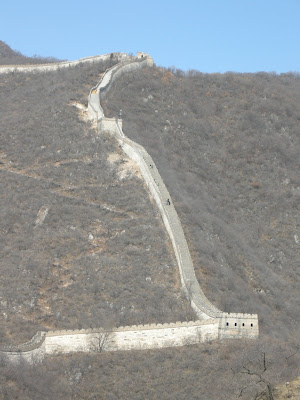 Here we go, this is the same photo as above, Jeff is in the black coat and khaki pants, and Sylvia is in green. They went up the the second guard tower from the top, the wall above the guard tower with the 'rails' along the stairs is in disrepair, so you can't go higher than that. 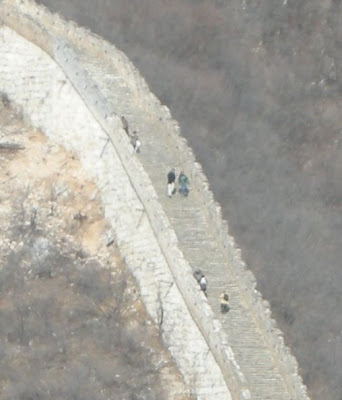 Jeff and I at the wall, Lotus took our photo. 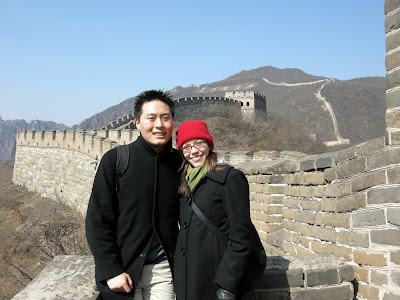 After the wall, we went to lunch at a greenhouse-like restaurant. There were plants all around with a water fountain, and we were served at a table with wicker chairs. There were some interesting, and tasty, vegetable dishes, that my stomach is telling me may not have been ALL vegetarian. It is difficult to find vegetarian things here, and some places think that ‘vegetarian’ means just vegetables, but might have a beef or chicken stock or sauce base. Those are the dishes that I figure out a few hours later that something was not quite right :(

After lunch we went to a tea house and had a tea demonstration. It was very much like how I imagine a wine tasting to be like (since I have never been to one, I really have no idea, but I think it was similar). We were able to taste about 5 teas, see some ‘tricks’ that the hosts would do with color changing mugs and whatnot, and of course the entire time they are marketing their products that they conveniently walk you to after the ‘tea ceremony.’ I must say though, loving tea, this was some of the best tea I have had in a long time. Probably because it is so fresh, and they know at which temperatures each tea should be steeped at and how long. We ended up buying a few things of course ;) 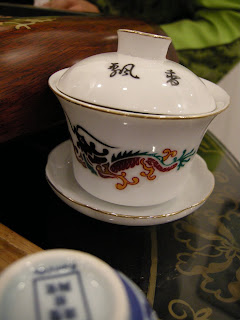 After all that, Sylvia and I came back to the hotel, while Jeff ran out to do an errand for work. I started downloading photos, but since it said it would take about 15 or so minutes to upload I laid down a promptly fell asleep again. I woke up an hour or so later and Jeff and I went out to the connected upscale mall to grab something to eat. We walked around, then went outside, but didn’t stay out for long, as most of the stores were closing up and it was getting fairly windy and cold.

At 11pm our time, 9am Chicago time, I was finally able to video chat with my parents and Chase! It was so wonderful to be able to see my little buddy again, even through a screen! He didn’t know what to make of it at first, but then got to kissing the screen and playing peek-a-boo. It was the best thing I think I could have had before going to bed tonight.

I love this adventure in China, but I miss my little guy so much, I wish I could have the best of both worlds, but a 17 month old on an international flight with jet lag and everything would have been stressful for EVERYONE involved. Thank you mom and dad for watching Chase, it means so much that I know he is in loving hands while we are away. 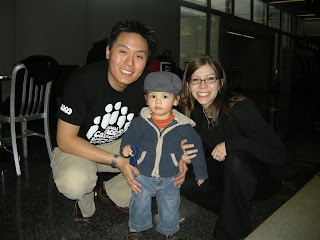