So in our excursions around Beijing so far, we have encountered a few signs, advertisements and products that don't quite get the same message across in English... here is one (just for you Micah and Sarah!). It also looked a bit more runny and had some bubbles in the bottom, needless to say, Jeff and I stayed away from the 'tomato sauce' when eating our fries that night: 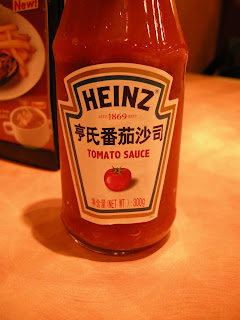 Also that night, at the American themed Steakhouse: 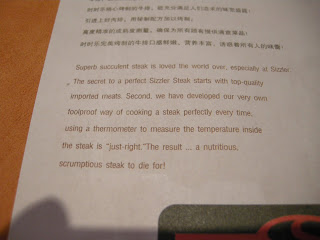 Could you read it? In talking about the steak preparation: "...We have developed our very own foolproof way of cooking a steak perfectly every time, using a thermometer to measure the temperature inside the steak is 'just-right.' The result... a nutritious, scrumptious steak to die for!" REALLY? This steakhouse developed a meat thermometer! WOW! They should get a prize for that one.... I think Jeff said that night that their meat thermometer is probably patient pending ;)
On to some more of the cultural sites... the FORBIDDEN CITY (or the not-so-forbidden city anymore, as you can see by the crowds that are still in attendance on a freezing winter day).
That day, Sunday, we walked to the subway and took the metro a few stops over to the station south of Tian' Anmen Square. Stepping out above ground we saw to the south of us a newly renovated (since Jeff had been here 5 years ago) historical looking street with newer shops on the lower levels. This is pretty much what every 'China Town' in the USA strives to look like... and it had a Hagen Daas ;)
To the north of the subway station was Tian' Anmen Square, which is absolutely the biggest flat paved square of land I have ever seen. The square houses the tomb of Mao Zedong and a few other monuments, as well as a huge Chinese flag that is guarded by at least 6 guards facing North, South, East and West, a 500+ ft perimeter that is roped off and also has guards stationed. To enter the square, they also had guards posted with metal detectors and wands. Jeff didn't remember this from his last trip here, but I remembered in a conversation with one of the resident professors that he had mentioned that Congress is in session here in Beijing. I guess it only happens once a year, so I am figuring they are doing some extra security measures to their important monuments.
We walked north across Tian' Anmen Square to the Gates of the Forbidden City, paid for tickets and an audio guide (I would definitely recommend it to anyone visiting), and headed with the masses of tour groups into the main square.

One of the guardian dogs, the female - notice the cub under her paw, in front of the Gate of Supreme Harmony. You wouldn't believe how long it took me, standing there, to get a photo with no one walking through! 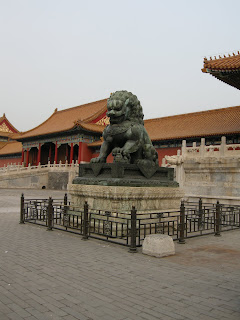 Notice the crowds? Here I am in front of the Hall of Supreme Harmony... as Jeff mentioned, this place has a lot of harmony going on. I have my audio guide and my 'North Face' hat that was purchased at the Great Wall, best purchase of the trip so far since it has been one of the coldest winters in Beijing, like EVER. 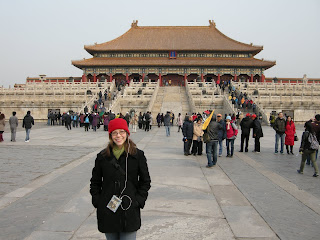 Love the tomato sauce! Everything looks so fun and beautiful! I am so glad you are recording everything! Are you missing Chase like crazy!? I love you! I made 3 of those baby shoes and my mom gave me a bunch of fabric so we can make some more together! They are so fun! Keep enjoying China!